Woodbrooke have produced guidance on the use of video conferencing for Meeting for Worship and Quaker Business Meetings. This includes a “How to Guide” for the Zoom application.

We invite Friends to join our
Daily Epilogue

This will be held in the manner of Woodbrooke’s Epilogue, with a virtual ‘Friend on the internet’ sharing a piece of writing, music or a piece of art or craft. On joining, we will be keeping our microphones muted.  We will sit with the offered piece, and should Friends feel moved to minister we can simply ‘unmute’ our microphones so that we can be heard.

Interested in helping? Pip (worker in SW England) will be coordinating offers to be the ‘Friend on the internet’.
Please email piph@quaker.org.uk if you’d be willing, with preferred days.

Unsure about Zoom meetings?
https://www.woodbrooke.org.uk/about/online-mfw/Online-worship-advice
and read “A Quaker Guide to online worship and meetings”
or piph@quaker.org.uk  for help

To be held at the Pioneer Centre, Cleobury Mortimer.

An all-age gathering based loosely round the book ‘Active Hope – how to face the mess we’re in without going crazy’ by Joanna Macy and Chris Johnstone. 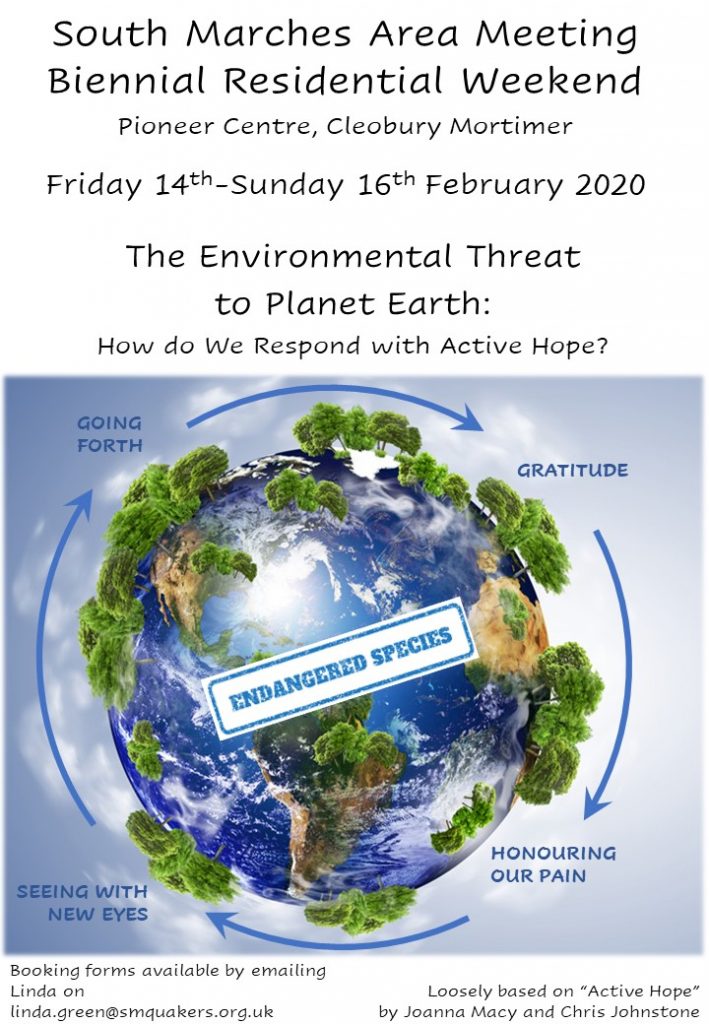 The Winter newsletter for the Pales is available on the Pales website.

warmly invite you to a showing of the documentary-

War School, a film about the battle for the hearts and minds of children in Britain.

(running time 85 mins)
Followed by discussion over refreshments. There will be a retiring collection towards expenses. www.war.school

To be held at the Pioneer Centre, Cleobury Mortimer.
An all-age gathering based loosely round the book ‘Active Hope – how to face the mess we’re in without going crazy’ by Joanna Macy and Chris Johnstone.
For further information contact a member of the planning group: Morag Sinton (Abergavenny), Kate Seekings (Hereford) and Ursula Freeman (Ludlow).
To download the booking form – please click here.

The September Newsletter for the Pales is now available.

Many of you will know about AVP but for those who don’t it was set up (by Quakers) in a New York prison in the 70’s after a request by some of the older inmates for something to help the younger ones deal with conflict in a better way.

It spread across America in prisons and in the community and is now run worldwide in more than 50 countries. It is no longer a Quaker organisation but many Quakers are still very involved.

AVP Britain became a separate charity in 80’s and we have regional areas who organise the workshops.

I became involved several years ago and became a facilitator two years ago.

I have done workshops in London, Manchester and Chester and several in Berwyn super prison in Wales.

I am keen to get them into Long Lartin and am working on that at the moment.

We no longer have a Midlands regional group as the last person had to give up through ill health. It would be lovely to get it going again but I am only too aware that it’s a big project and I couldn’t do it alone. I am also going to be part of the National prison’s group.

At Berwyn near Wrexham the Local AM set up a support group in order to be able to offer regular workshops there. Maybe that would be a starting point.

Is there anybody out there who would be interested in finding out more and possibly joining a group? You wouldn’t have to get trained as a facilitator necessarily there are lots of support roles.

Do contact me if you have an interest in this. I could run a taster workshop initially to demonstrate what we do or we could simply meet up and decide a way forward.

“We have the technology to power ourselves with 100% renewable energy, to feed ourselves sustainably and to leave a safe and habitable climate for our children and future generations” Centre for Alternative Technology

Why do we need net zero emissions?

The UN Paris Agreement demands that humanity must reach net zero greenhouse gas emissions by the middle of this century. This is a big shift – current UK climate change targets do not offer a good enough chance of avoiding what is now considered to be extremely dangerous climate change.

The Centre for Alternative Technology’s Zero Carbon Britain project offers the hard data and confidence required for visualising a future where we have risen to the demands of climate science. It helps to reduce fear and misunderstandings and open new, positive, solution-focused conversations. It’s integrated approach explores all aspects of climate solutions, from renewable energy and energy efficiency to diets and land-use, looking at how these can work together to help us build a zero carbon world.

Paul Allen – External Relations Officer at the Centre for Alternative Technology and Project Leader for Zero Carbon Britain – will talk about the challenges faced and the solutions available today. Rather than an unresolved technical challenge, it is increasingly accepted that we must overcome a mix of political, cultural and psychological barriers. He will show how we can rapidly reduce UK greenhouse gas emissions to net zero using only current technology, at the speed demanded by current climate science. And how we can do this whilst maintaining a modern standard of living, and meeting our energy demand at all times with 100% renewable UK energy sources.

The Quaker Meeting House in Hereford is open for Heritage Open Days.

Discover our interesting building which is tucked away in a passage off King Street in Hereford.  Even people who have lived in the area for many years are surprised that we are here!

The Quakers have used this building for 198 years.  Before this it was used for flannel manufacturing  –  an 18th Century scheme to help the unemployed into work.  Then it became the location of a school teaching adults to read and write.   ‘Friends First-Day Adult School’ as it was called, was a very welcome and popular service to the local community at a time when education was not available to all. Quakers were very much involved with setting up of the school in 1883 and continued this support into the 1950s.

We would be very interested if anyone has some information about this school.  Perhaps a member of your family attended?   Do come along and tell us about it.

We have a display board and information sheets on the history of the building.

You are welcome to have tea and cake in the garden – inside if wet.

The dates and times that we will be open will be:

Also open for Ride and Stride

Then again on the following week: